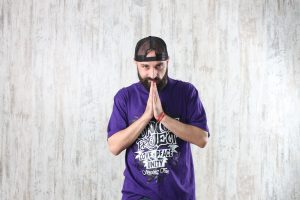 Here at headquarters at the bustling offices of Urban Dubz PR, we listen to a lot of music (No kidding!). A plethora of tracks (both single releases and albums) from budding stars of the future as well as accomplished writers, producers and performers who have been here many times before. Most of these are what you would call the “traditional format of vocal based tracks with singers or rappers” over traditionally arranged tracks looking for radio play in various territories around the globe. One thing we don’t get a lot in Instrumental music to help promote so it was refreshing experience when this Beat Mixtape arrived on our desks from a Producer/artist by the name of Charodey Jeddy.

The concept behind a Beat Album is quite simple – it’s a showcase of the thoughts and ideas of a producer without non-sampled vocal that ticks every box of what a song should be but presents it in a non-conventional way, within a particular genre of music or in a variety of genres sometimes simultaneously. As indicated by its is tempo, the music would be described as Hip Hop. Representing the foundation of the ”Boom-Bap” of old school hip hop but brought up to date with the synth sounds and quirky eclecticism provide by the technology from the present day.

If I was to describe this 10-track album in layman’s terms, I’d say it was Edgy, Raw, Dissonant, Direct, Drum & Bass Heavy, Atmospheric in places (One track (Da Flow) even sounding a little like Neptunes/Flipmode back in the day. Lastly I’d say this type of product is ‘Free’, mainly because the producer has full control over the structure and presentation of the sounds emanating from the speaker. This stuff is Abstract, Conceptual, Musical, Electronic Art – and yes it is an artform. Some of you may have heard of masters such as Flying Lotus, Gas Lamp Killer, Samiyam, Kutmah, Mike Slott, Kaytranda, Janiero Jarel and by no means least the Mighty J-Dilla (may he Rest in Peace). If you don’t know I suggest you get with it! It’s a very big, diverse, vibrant international scene. There are even Beat Cypher events where Producers compete in front of their peers and a packed-out audience. The winner is the producer who gets the best response from the crowd – simple!

As the tempo would indicate Hip Hop to even the most out the loop individual, its actually quite a generalisation to just describe an instrumental beat track as just one type of music. If you listen closely there are many different nuanced influences from Breakbeat to Industrial and futuristic to ambient to Angry to laid back to Dub-Reggae. Within what may just look like one track or one flavour at first glance. If not a direct end-goal of accessing the commercial chart (and as stated ‘not wanting to’), believe it or not many Beat Tapes over the years have influence the genres of tomorrow so they have much industry relevance by their underground roots. The common understanding of the future always starts in the gutter of the underground. That’s where it’s conceived. We love our beats here at Urban Dubz and ‘Phat Ninja Vibes, Vol 2 is well worth a listen because there’s something for everyone there